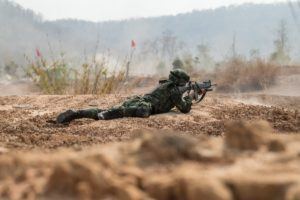 Men and women who were serving in the United States military were provided earplugs that were not long enough for proper insertion into the ears of a user. The length of the earplugs resulted in a fit that would gradually loosen over the course of use and subsequently fail to provide user protection and noise cancellation. Individuals who believed that they were using superior protection gear are now suffering hearing loss.

Combat Arms CAEv2 Earplugs, Version 2 ear plugs were manufactured by Minnesota headquartered 3M Company (3M) and known to be an ineffective method by which to protect members of the military. Still, the company knowingly made the decision to sell the defective earplugs to the military.

The experienced attorneys of Frank Charles Miranda, P.A. are prepared to help the men and women who serve in and served in the United States military

3M knew that men and women in uniform were not adequately protected when using CAEv2 Earplugs, Version 2 ear plugs. The company made the fateful decision to put making a profit ahead of doing what was right by informing the United States military that its earplugs did not work correctly.

If you or a family member suffered hearing loss as a result of using defective 3M CAEv2 Earplugs, Version 2 ear plugs, fill out the form below and give us a call.

Please fill out the form below and one of our attorneys will contact you.

Our Office
Best Personal Injury Law Firm in Florida for 2018 and Florida’s Real Estate Litigators of the Year 2018 from Lawyer International Global Awards.